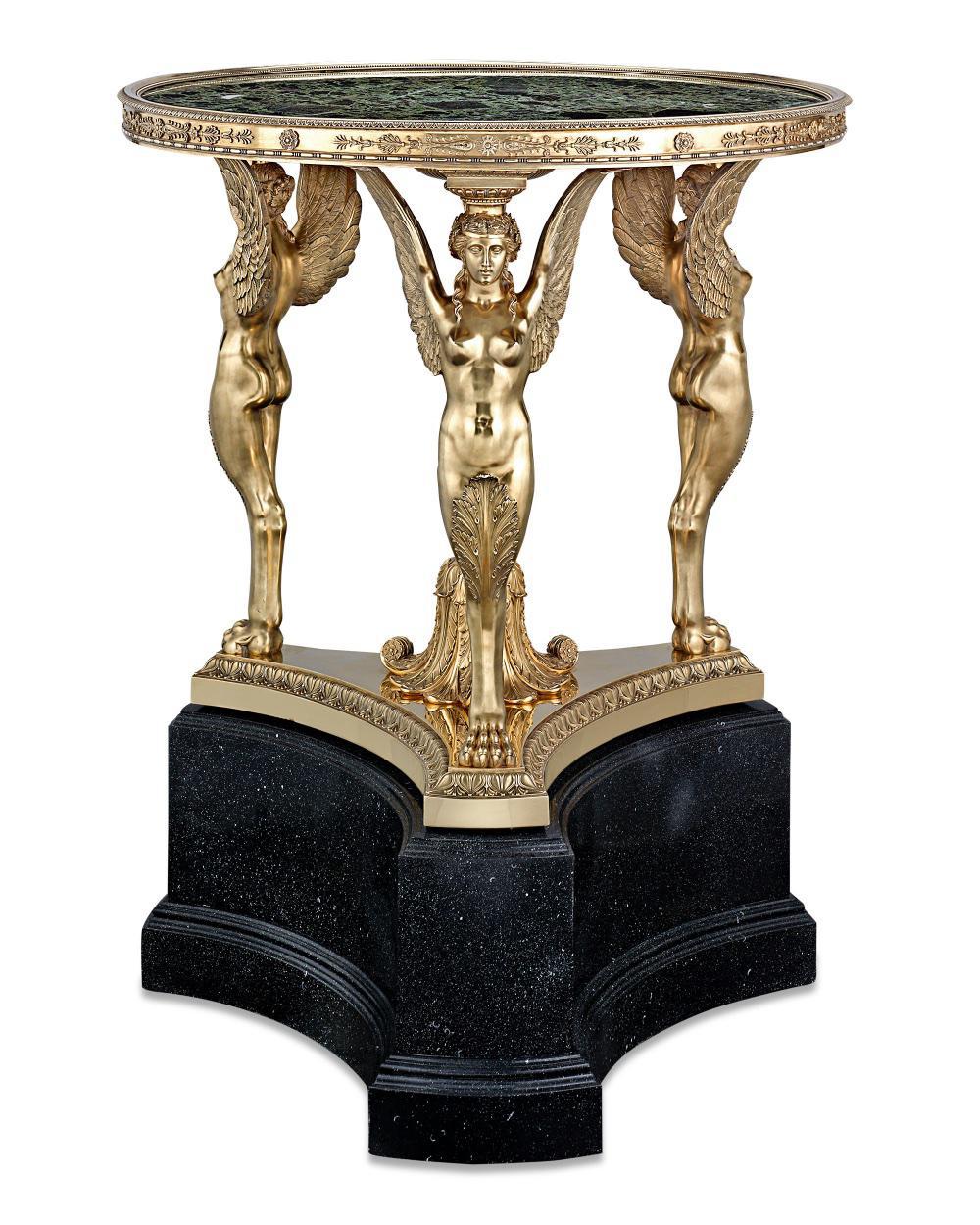 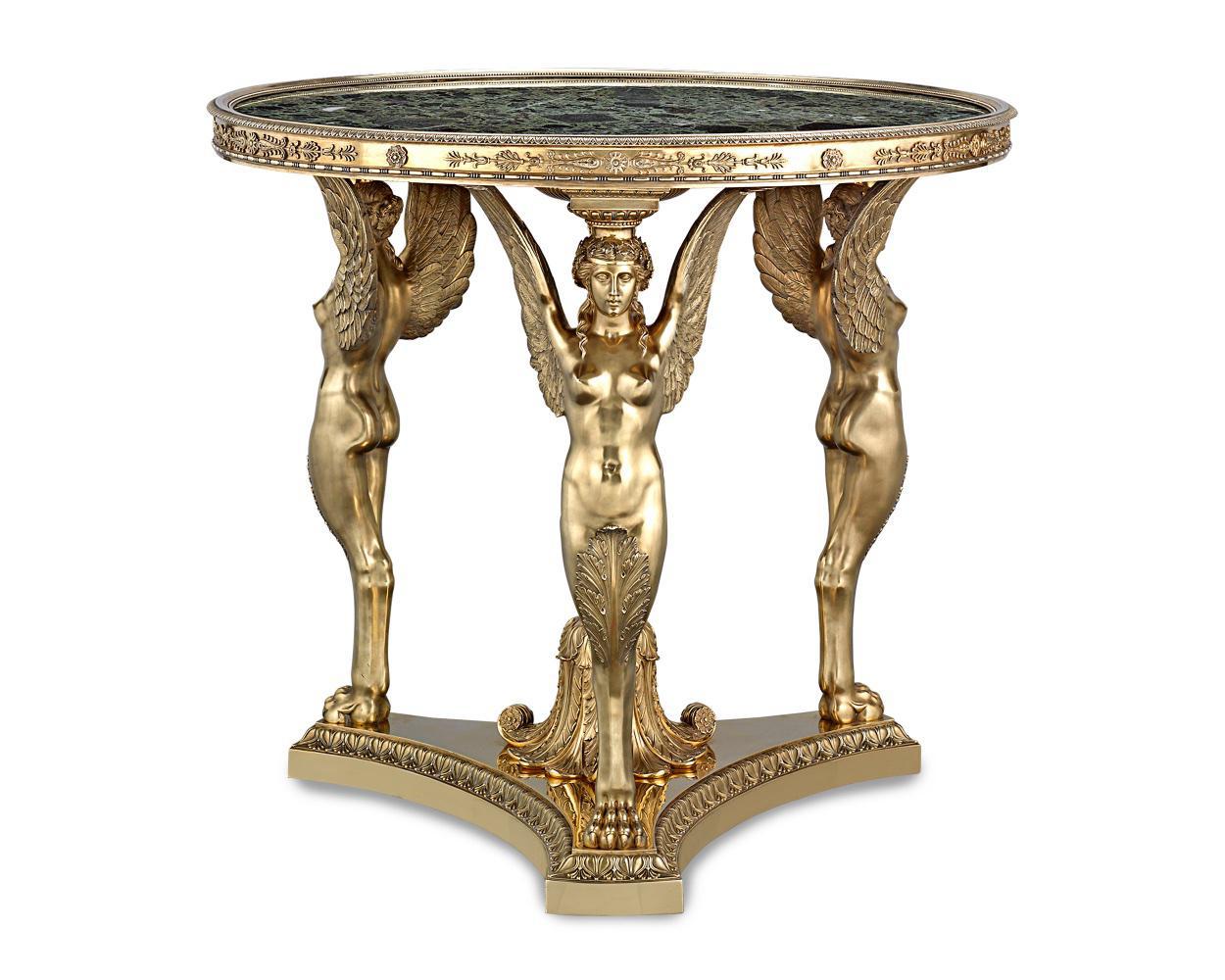 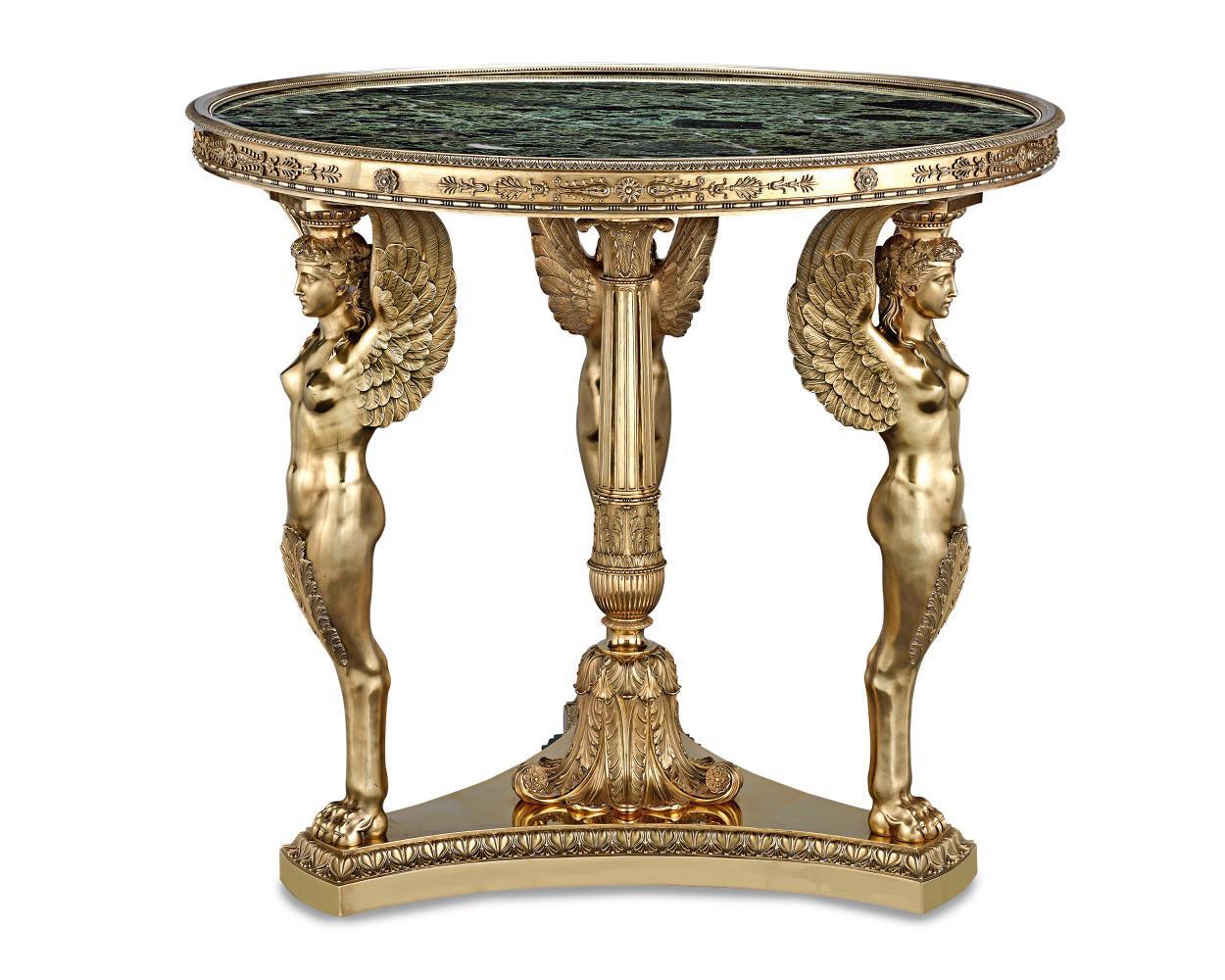 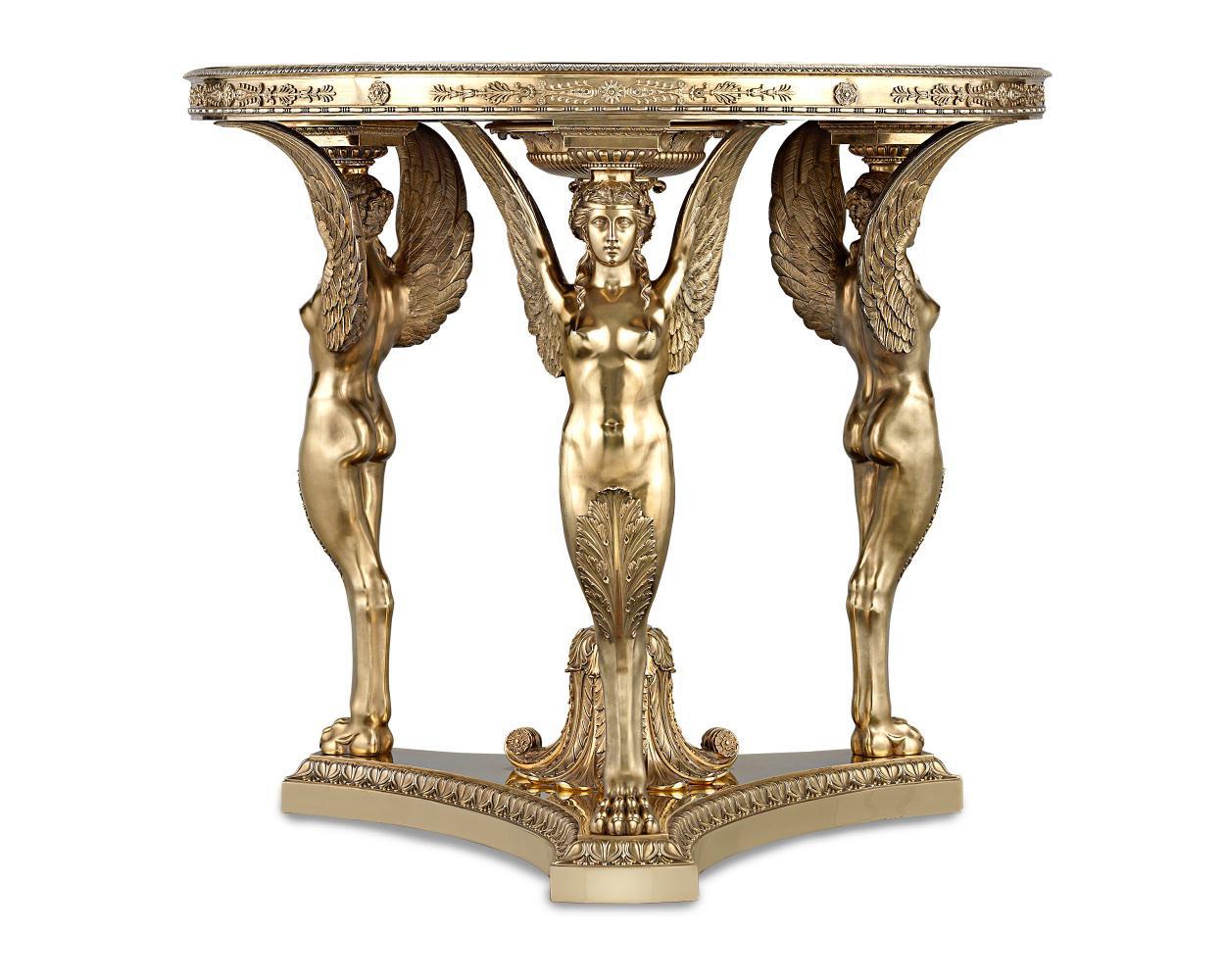 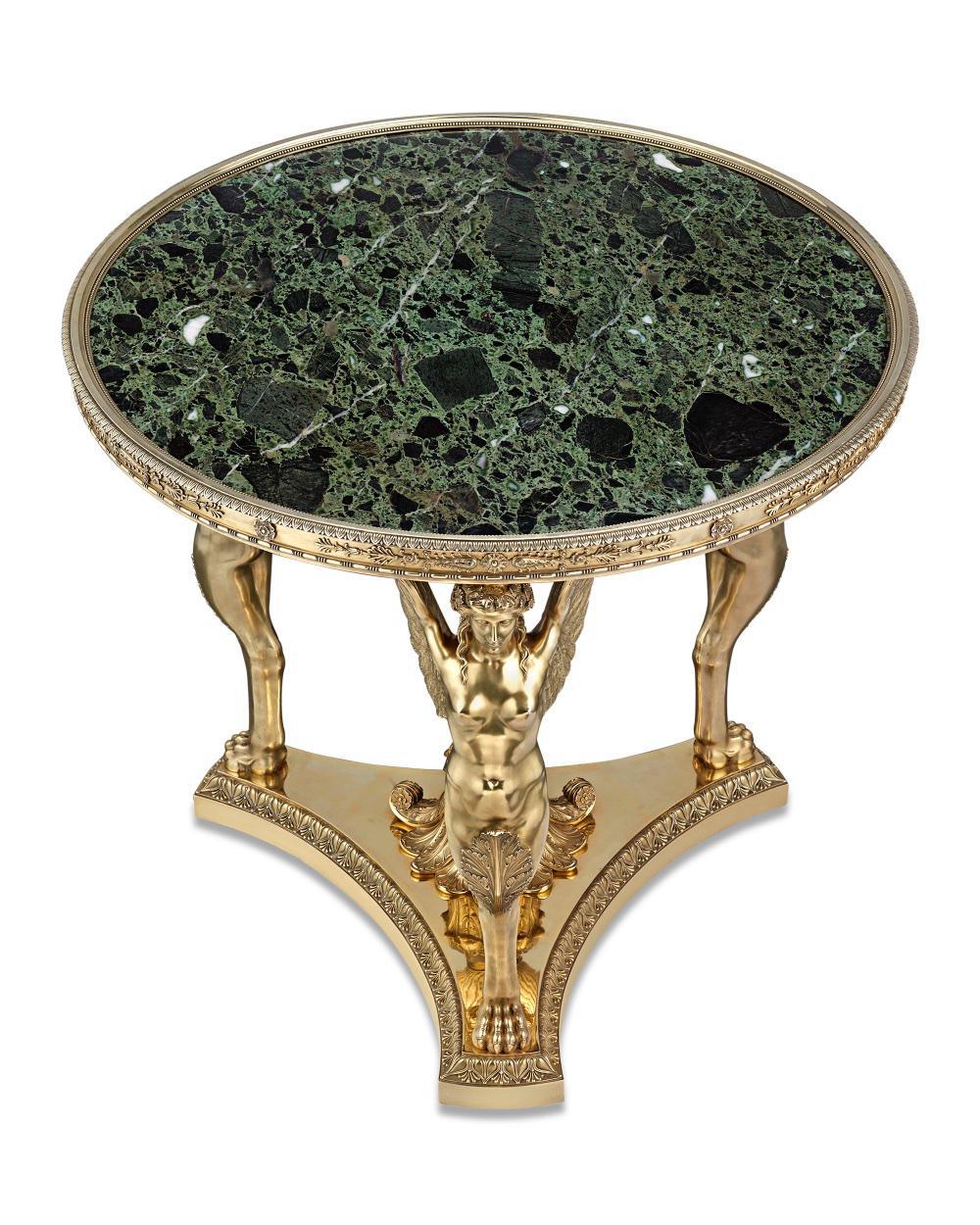 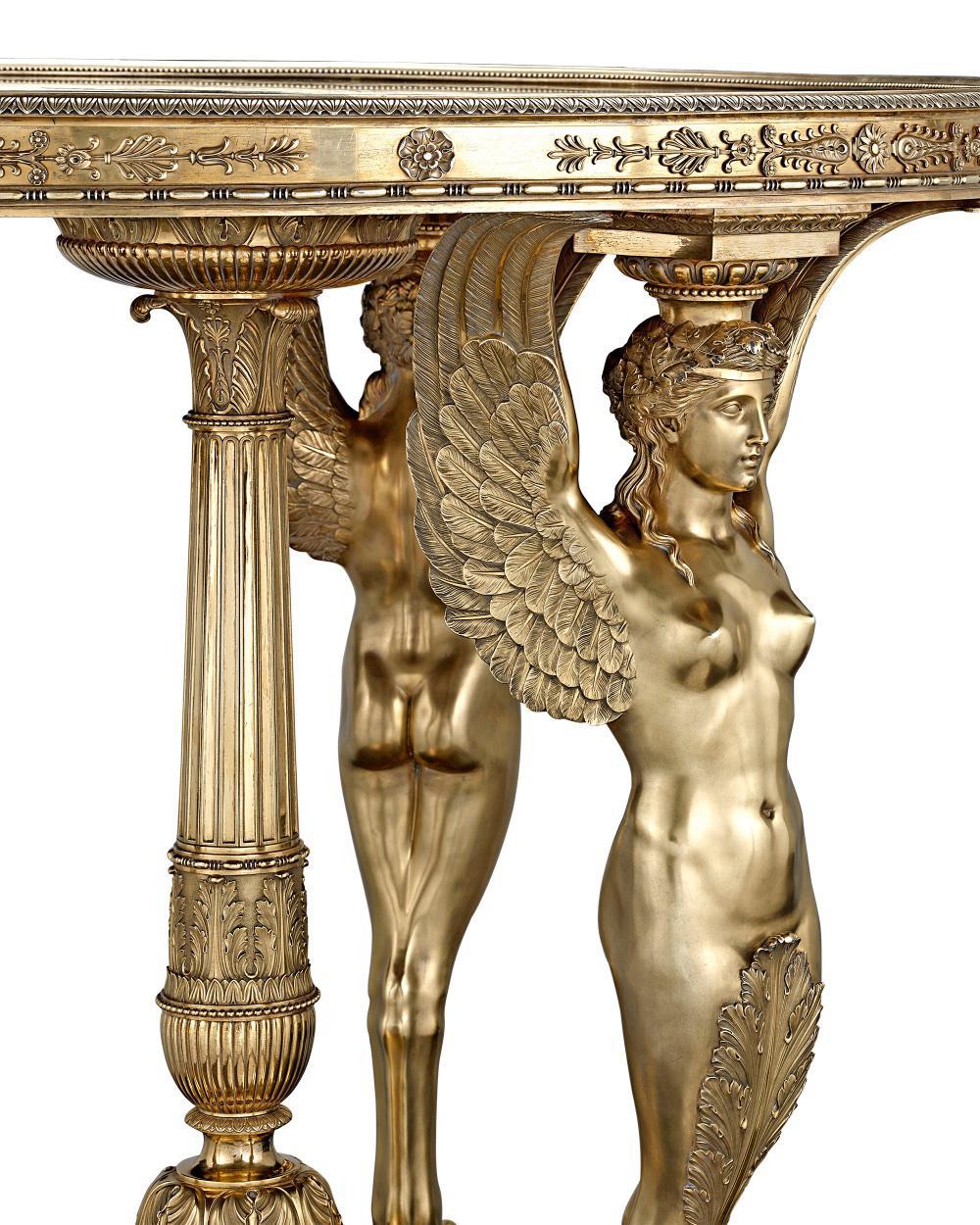 The turn of the century was the golden age of the great international exhibitions, the venues at which artisans from across the globe would showcase their absolute best creations for the world to see. The items on display were the often the finest examples of science and art ever created, as the sheer number of visitors provided the unique opportunity for artists to display the very best they had to offer. This incredible silver-gilt tea table is ...

The turn of the century was the golden age of the great international exhibitions, the venues at which artisans from across the globe would showcase their absolute best creations for the world to see. The items on display were the often the finest examples of science and art ever created, as the sheer number of visitors provided the unique opportunity for artists to display the very best they had to offer. This incredible silver-gilt tea table is

one such masterpiece, exhibited at not one but two international exhibitions. Created especially for the 1904 St. Louis International Exposition and later exhibited at the Exposition de Liége in 1905, its artistry and craftsmanship rival those of silver works found in any museum in the world.

The one-of-a-kind table was created by the renowned Paris firm of Maison Aucoc, one of the leading goldsmiths and jewelers of the Second Empire and Art Nouveau movements. This tea table, along with the tea set that it once held, was the sole contribution of the firm to the St. Louis Exposition. It is clear from both its materials and its exceptional level of detail that Aucoc succeeded in making something worthy of this international stage - the judges agreed, as the set won him a Grand Prize. It can be counted among the firm's masterpieces and is undoubtedly one of the most significant exhibition objects to have ever come on the market.

The piece was clearly crafted with both luxury and grandeur in mind. Unlike almost all other tables from this period that were crafted from gilt bronze, this particular example stands apart as one of the select few made from 95% pure silver - the highest standard in the world. Crafted in the Empire style, it is a tour de force of silver design. Palmettes and rosettes encircle the circular top, which is inset with a solid specimen of green marble. A capital column resting on acanthus leaves supports it at the centre, while three winged women terminating in lion's claws support the outer edges.

While the designs for Aucoc's tea set were inspired by drawings by the great French designer Charles Percier, this table almost certainly took its inspiration from the gilt-bronze mounted furniture of the firm Thomire Duterme et Cie. Led by the great sculptor Pierre-Philippe Thomire, the firm was the preeminent Parisian gilt metal manufacturer of the early 19th century, patronized by Napoléon, King George IV, and other royals from around the world. A gilt-bronze mounted malachite table made by Thomire for the Russian Prince Demidoff in 1819, now found in the Pitti Palace (Florence), is supported by similar acanthus-draped winged female torsi as are found in the present table. Aucoc specialized in works that looked back to the great designers of the First Empire, evoking the elegance of a bygone era.

The Maison Aucoc of was founded in 1821 by Louis Aucoc Aine as a silversmithing business at 154 Rue St. Honoré in Paris. In 1835, the business moved to Rue de la Paix, and in 1854, he retired and left his son Louis Aucoc in charge of the family firm. During his tenure, Aucoc added jewelry manufacturing to the already successful silver business with great success. The 1870s proved to be a time of great expansion for the company. Aucoc purchased the Maison Lobojois and consolidated both businesses to create La Maison Aucoc, where the legendary René Lalique apprenticed. Aucoc participated in the major international exhibitions of the day with some of the firm's grandest furniture and jewelry creations.

This table was undoubtedly one of the firm's greatest exhibition contributions. Presented among the very best works not only from France, but from around the globe, it stood above all the rest and won Aucoc the Grand Prize. As G. Henry stated in his overview of the St. Louis exposition: "The set will remain one of the most interesting documents of the French Goldsmith of our time and is a great honour to Mr. Aucoc, confirming once again his talent appreciated by the member of the jury who unanimously awarded him the Grand Prize."

Marked "Andre AUCOC Paris" and with the hallmark for .950 standard silver.

Prices exclude custom clearance fees which will be charged directly to the client by your receiving courier, importer or government.
£710,000
Reference

Thank you for your enquiry.

We will get back to you soon

Are you sure you would like to remove "" item from the shopping cart?